The spelling errors in the text are those of Captain Bligh. I retained them for color and authenticity. There some words that may be unfamiliar to most readers.

Portable soup was dehydrated food, like jerky, sometimes called pocket soop or veal glew. It would keep for many months, was filling and nutritious but also tiresome and unappetizing. It was a staple for seamen and explorers.
Wort is the sugar-rich unfermented malt extracted from grains in the process of brewing beer.
Deadlights are shutters or plates fastened over a ship’s portholes in stormy weather.
Helm be put aweather-in the direction from which the wind blows, meaning westward. 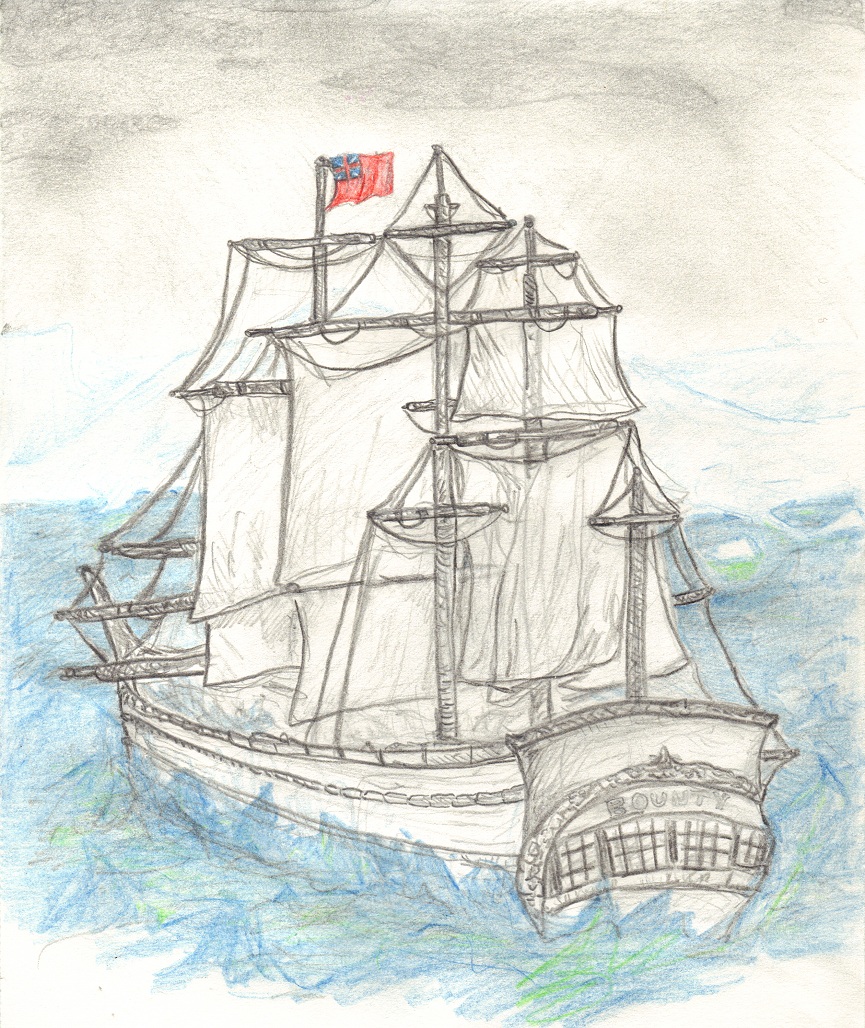 From the Logbook of the Bounty

March 28, 1788, Light Winds & an exceedingly high Sea from the SW. It is beginning now to be cold and the Weather damp I ordered the People to have Wheat served every day with Sugar & Butter to enable them to have a comfortable hot breakfast, and bear fatigue.

in me to persist any longer in a passage this Way to the Society Islands. Towards Evening the Wind and heavy falls of Snow became so violent, that I must have laid too, and the Wind backing to the Westward became so fixed with a high Sea running led me to determine to bear away for the Cape of Good Hope from the following considerations. First, the surest way to accomplish the Grand object of the Voyage. That the Season has commenced when most certainly Strong Gales are frequent and lasting, and that from a continuance of them should I at last fail of getting round the Land, such a loss of time would be attended with much risk and probably very detrimental to my proceedings in future. That my People being but a few hands, and by suffering more fatigue may suddenly be taken Ill, and thereby the Grand object of the Voyage be greatly endangered. For Notwithstanding their astonishing good health at present (except Eight who are laid up with Rheumatic Complaints and One with a broken Rib;)< yet it requiring all our force to complete the necessary duties in these heavy Gales they are become jaded and symptoms of disease may follow. That the Ship begins also to complain and is obliged to be carefully attended with the Pumps. That from the present Month I may get to Otaheite (Tahiti) and be ready for leaving it in good time, and be secure of being in Endeavor Streights and at Java in a proper season; but if by persevering in this passage (which I am convinced cannot be accomplished during the time I could remain here longer) I should meet with further delays by Accidents, I should be highly reprehensible under the discretionary orders I am honoured and intrusted with to perform the Voyage. That I see no Ill that can be attended with the present conduct of my pursuit, the proper time for my passing the most intricate part of the Voyage being fully guarded against, and as it is universally allowed by all Navigators, that the Westerly Winds are the prevailing ones in this Sea, we have every reason to expect a quick passage to the Cape of Good Hope, where every Man will get proper refreshment and have his health perfectly established. That upon the whole being summed up, One amounts the matter to a certainty and the other to a doubt, and my honor and Character being at Stake, which to take. I rely on my conduct for the former, being the only one elligible, however it may prove Successful. I ordered the Helm to be put a Weather to the universal joy of all hands at 5 O'Clock and as the Gale continued it was an additional satisfaction to think we had lost no time. The Forenoon was taken up with making Fires in different parts of the Ship and Cleaning among the People, and by Noon they were all tolerably dry and comfortable with chearfull spirits that they were no longer to remain Off Cape Horn. This is the 30th. Day of my being in this tempestuous sea... and had every hopes of accomplishing the Passage round; but from this time we had no intermissions from hard Gales and very severe Weather, scarce ever leaving it in my power to do much better than lye too. The Sails & Ropes were worked with much difficulty, and the few Men who were obliged incapable of getting below, and some of them sometimes for a While lost their Speech; but I took care to Nurse them when off duty with every comfort in my power. The Invalids I made attend and dry their Cloaths and Keep a good fire in every Night, so that no Man when he took his Watch had a Wet Rag about him. They were at three Watches, and When lying too, I would only suffer two Men on Deck at a time. I gave them all additional Slop Cloaths, and I made their Meal pleasant and wholesome as may be Observed in the different days Occurences. As I kept far to the Southward no Current seems to have materialy Affected us.

Captain Bligh and his men successfully sailed to Tahiti but had to wait for five months for the breadfruit plants to be suitable for the voyage around the Horn to the West Indies. Because of the five months delay, Bligh allowed the men to live ashore to tend the potted breadfruit. Rather than being sadistic or a martinet as he is presented in film, he seems to have been solicitous to his crew and sympathetic of the hard duty in the attempt to ‘round the Horn.
However, many of the crew found Tahiti to their liking, especially the women. Fletcher Christian, who had replaced the original sailing master, married a Tahitian woman. Other members of the crew made less formal relations. Blight attempted to restore discipline for the voyage to Jamaica, the Bermudas and other islands dressing down Christian in front of the crew and Tahitians, flogging for minor infractions the sailors were resentful. Three deserted the ship. They were quickly recaptured but their disloyalty made Blight suspicious of the crew and their leaders. Twentythree days after their departure from Tahibit, the crew seized the ship, put Bligh and his loyal crew members in an open boat, and returned to Tahiti