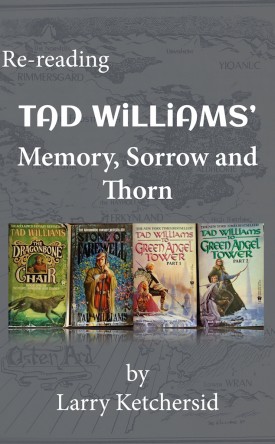 Tad Williams’ Memory, Sorrow and Thorn is the fantasy series cited as a major influencer of George R. R. Martin, Christopher Paolini, Patrick Rothfuss and many others. With the publication of The Last King of Osten Ard, the new series set in the same world, readers of the original series may need a re-read or a refresher.

This eBook goes through each chapter in all three massive books, and includes additional chapters on the series place in fantasy genre history, the three great swords, conjecture on the new Last King series (and the additional new books set in Osten Ard) and a list of additional resources for information about this deep and expanding place.

Many thanks to Deborah Beale and Tad Williams for their support on this project.

Larry Ketchersid spent almost a decade writing reviews, essays and other dribble at the two-time Hugo award winning SFSignal.com. An updated version of one of those essays is included in this eBook.

He’s also written two novels (Dusk Before the Dawn, Software by the Kilo) and several multi-media travel apps in the Apple App Store (Grand Canyon, Quebec City, and others).
He ran the Pikes Peak Ascent (the half marathon up the side of the mountain) and lived to tell about it.

A Note From the Author

Like many, I read this great fantasy series log ago, when it first came out. With news of Tad Williams returning to the world of Osten Ard, I needed a refresher. And since I did not know when his series would come out, I needed notes to use, so my poor and cluttered memory could be nudged and reminded.

I’d suggest everyone read or re-read this series in advance of the new books (The Last King of Osten Ard trilogy and the other two books Williams has written).
If you need a summary, re-fresher or companion read-along guide, I hope you enjoy this eBook.