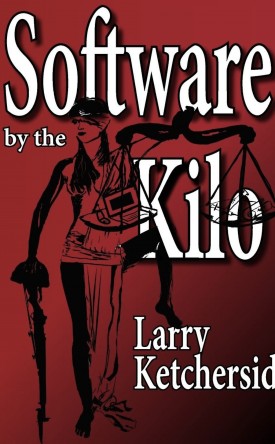 Software By The Kilo

-Paul Levinson, author of The Plot to Save Socrates and New New Media

Jason and Kenny needed investors for their startup company but when Italian drug smuggler Roberto Campioni makes them an offer they can’t refuse, they get more help than they bargain for: the Feds and Interpol are watching, the smuggler’s cartel created in violence during World War II is crumbling, and Roberto’s henchmen, even with their love of Clint Eastwood movies, aren’t the type of corporate advisers the pair dreamed of.

“Our other merchandise is sold by the gram, or by the kilo” said Luca.
Carmine smirked at Jason.
“Think you can sell software by the kilo?”
Jason returned the smile.
“I’ll sell it any way they’ll buy it.”

Larry Ketchersid started JoSara MeDia quite a while ago, after writing his first novel during many many trips to Paris to close a software contract. Publishing is like software, isn’t it, he thought. eBooks are just web pages, aren’t they, he thought. With his lovely wife Audrey, they set off navigating the ins and outs of publishing print and eBooks, and eventually added multi-media apps for tablets. It certainly wasn’t as easy as it seemed.During the daytime (and many nights and weekends), Larry runs a security software and services firm. He has degrees in Math, Computer Science and Physics, and wishes his knees would still let him play Rugby (Woodlands RFC and Texas XXXs) and martial arts (Soo Bahk Do, Tai Chi), but he’s content currently to just job in a straight line.

Larry and Audrey have helped non-profits such as the Texas State Historical Association and the Museum of Fine Arts, Houston with various eBook, publishing and app projects.

Larry and Audrey currently live where ever the airplanes take them.