Browse: Home » Authors » The many reasons why we are publishing Unburning Alexandria by Paul Levinson 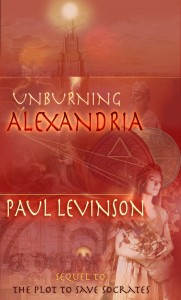 JoSara MeDia is proud to announce that we are publishing Paul Levinson’s newest novel, Unburning Alexandria, the sequel to The Plot to Save Socrates.Targeted availability for the eBook version is the end of April, with print editions later.

Why is JoSara publishing Paul’s books? Here’s the short version:

I met Paul Levinson on MySpace. We liked each other’s books. Then we met in person. We traded signed books. We kept in touch. JoSara was born. And last year we published eBook editions of The Silk Code and The Plot to Save Socrates. Most importantly, my wife likes Paul, and we enjoy drinking wine, dining and talking about all manner of subjects with Paul and his lovely wife Tina. What better way to

There’s more to the story, of course, and we hope it will go down as one of the great episodes in publishing history. But first:

Here is a summary of Unburning Alexandria:

Mid-twenty-first century time traveler Sierra Waters, fresh from her mission to save Socrates from the hemlock, is determined to alter history yet again, by saving the ancient Library of Alexandria – where 750,000 one-of-a-kind texts were lost, an event described by many as “one of the greatest intellectual catastrophes in history.”

Along the way she will encounter old friends such as William Henry Appleton, the great 19th-century American publisher, and enemies like the enigmatic time-traveling inventor Heron of Alexandria. Her quest will involve such other real historic personages as Hypatia, Cleopatra’s sister Arsinoe, Ptolemy the astronomer, and St. Augustine – again placing her friends, her loved ones, and herself in deadly jeopardy.

In this sequel to the THE PLOT TO SAVE SOCRATES, award-winning author Paul Levinson offers another time-traveling adventure spanning millennia, full of surprising twists and turns, all the while attempting the seemingly impossible: UNBURNING ALEXANDRIA.

The long version of the story:

My first book, Dusk Before the Dawn, was published in April 2006, and I promptly created a page for my book on MySpace. Yes, you all remember…way back when MySpace was cool and Facebook was still only available by students at certain schools. In December of that year, I picked up and read a copy of The Plot to Save Socrates. I enjoyed it thoroughly and put my notes on it on my blog, as I’ve done since I accidentally picked up one of my own books at the same used book store where I trade books…you get the picture.

I friended Paul on MySpace, and I’ll tell you that we still are friends there…but I’ve forgotten my MySpace login! He got a copy of my book. Then, much to my rookie author excitement, I received the following MySpace message:

Hey Larry – just finished Dusk Before Dawn – I liked it so much, I gave it a 5-star review on Amazon, and put it on my very exclusive Amazon list of best first science fiction novels … You did a really nice job of mixing science and myth, future and ancient …

Of course, I was blown away. Paul not only put my first novel on his Amazon list, he put it on several lists that he put together, asking nothing in return for doing so.

My novel was a finalist for the ForeWord Magazine Book of the Year awards that year, so I went to BEA in New York, and took the train trip out to Fordham U. to meet Paul. We decided that we were each others first Internet friend that we’d met as real live humans, and we were both pretty glad that the other wasn’t an axe murderer.

We kept in touch. When I was in New York, we’d have some wine. As Paul was working on his non-fiction text book New New Media, we did some experiments on Facebook (the Sierra Waters page) and a few in Second Life (where Paul gave a few interviews, with an avatar that looked a lot like him!).

My wife and I started JoSara MeDia more as an outlet to combine my programming and authoring experimentation. It grew in spite of us, with print books, eBooks and iPad apps as enhanced eBooks. It is still for me a night time job (I run a security software and services firm during most waking hours) but it is a huge passion, both for the authors and for the job of publishing and experimenting.

I asked Paul if he’d like some help publishing his backlist as eBooks, and we were in business. The Silk Code, and an “author’s cut” of The Plot to Save Socrates came out in rapid succession.

And now this: a sequel to one of my favorite time travel books, one that we will put out in print and eBook.

So why are we publishing Unburning Alexandria? There are many reasons, but mostly because, contrary to popular belief, it is enjoyable doing business with friends. I enjoy Paul’s sense of excitement and enjoyment, and we are very glad to be a part of it. After reading the latest draft (and, yes all you publishing professionals, we did agree to publishing it before reading it), we are even more proud to bring this story to you, digitally and in print.

Comments are closed, but trackbacks and pingbacks are open.